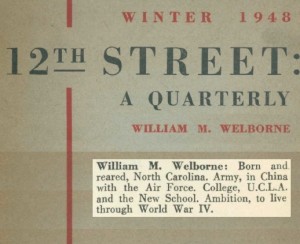 There have always been stories to tell about New York. There is a sense of romanticism about the city. It lives in popular imagination as a neon-lit playground, a place moved by words, images, and sounds. People come here to be lost or found. This image keeps them constantly flowing, moving in and out of the place that builds and crushes dreams.

It is a powerful poetic vision when considered within the context of the 40s and early 50s. New York, surrounded by the sounds of jazz and the restless poetry of the Beats, inhabited their spirits and called people to it to find their way along its streets.

It is refreshing, then, to read the short story “There’s Nothing Like Starting Off With a Fresh Clean Slate” by William M. Welborne. Published in the Winter 1948 issue of 12th Street, the piece does away with the idealization of the city at this time; it focuses instead on the darker side, the part that is “cheap and dirty and grimy.” One of the appealing notions of this fantasy is that anyone can form a community, become a part of something larger; however, in Welborne’s piece, there is an overwhelming sense of loneliness, of fighting—all alone—something so much larger than oneself. The unnamed protagonist struggles in a place that pushes against her, wearing her down. The choices she makes take her and her son into the dark corners, bringing the reader along with her.

This is the story of the outsider, of life beneath the surface.

Ashawnta Jackson is a perpetual student who occasionally tries her hand at the literary arts. 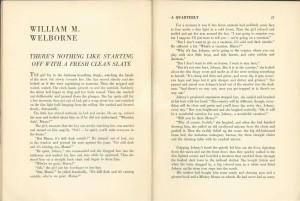 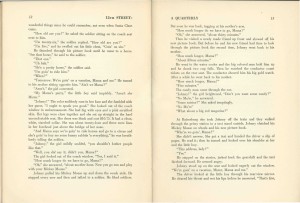 William M. Welborne’s “There’s Nothing like Starting off with a Fresh Clean Slate” highlights an instant in the journey of life that each and every one of us, no matter what year or century we live in, can experience without being aware of it. Published in 12th Street’s 1948 winter issue, Welborne’s six-page narrative sketches an all too common scene we find in novels and movies: one individual against the world and the life that holds them back binding them to the mundane.

The young woman’s decision to get up in the wee hours of the morning and leave behind everything in her life indicates the desperation one feels when circumstances turn against one’s will and wishes.  In her next momentous act, she abandons her son in an attempt to reject any and all reminders of the world she has set out to escape.

The woman’s actions might appear too dramatic or impractical for individuals who do find themselves in situations beyond their control but that suffocate their lives. The work, however, attests to the power of an individual’s defiance of the status quo, portraying the woman’s strength and capacity for protest and rebellion. In committing a personal yet public act, the protagonist does not merely withdraw from the present to cope, but she must also sacrifice what is familiar.  The story does not depict her ability to overpower that which conflicts with her will and desires, but rather the challenge of confronting the frustrating elements of society that limit our movement. It reflects the path common to all who are in search of that “fresh clean slate.”