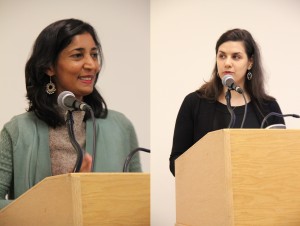 The New School event titled “Writing What You Don’t Know” featured poet Laren McClung and novelist Kiran Desai for a reading from their respective works and a discussion on the process of writing on an unfamiliar subject.

Laren McClung read from her collection of poems, Between Here and Monkey Mountain, based on her father’s experience in the Vietnam War. Kiran Desai read from her novel, The Inheritance of Loss, a story centered around an undocumented Indian immigrant in the United States and the ramifications of colonialism and the post-colonial status quo of former colonies and their populations.

Both McClung and Desai spoke of the process of writing narratives which at the outset were largely unfamiliar to them. Although McClung grew up with the main character of her book, she faced a challenge getting him to open up to her. McClung explained, “Vietnam was always there in the house growing up, this tension that was there but no one talked about.” McClung initiated conversation with her father by asking him about the military acronyms in Tim O’Brien’s autobiographical work The Things They Carried. “I would sit with the book [The Things They Carried] open in front of me and ask him what SOP meant—Standard Operating Procedure. Or RTO—Radio/Telephone Operator—and it turned out that was his job during the war.” From there, father and daughter began a nearly a decade-long conversation , which culminated in the publication of Between Here and Monkey Mountain.

While conceiving The Inheritance of Loss, Desai read journals of civil servants in colonial India.  She explained that her work revolved around placing the story she had in a larger context. Responding to a question from the audience about going back-and-forth between characters of different economic classes, Desai hinted at her real-life experiences, stating that everyday life in India is a constant interaction between the poorest of the poor and richest of the rich. “I am always trying to draw lines and make connections,” Desai said. “It is a slow process, but eventually one begins to see patterns, and from there the story begins to form.”