Since its inception at The New School in 2006, the Riggio Honors Program: Writing and Democracy has been a platform of initiation for many young writers. Whether they will go on to become highly published authors is not an issue that occupies their minds. At Riggio, it is all about writing. With established authors and poets as their instructors, Riggio students focus on what they can learn from these mentors; the accomplishment, for many, comes in the form of a clear expression of ideas and in the process of writing itself. Leigh Stein is one of many who benefitted from her time in the Riggio Program, during which she also served as Editor of the poetry section for 12th Street, Riggio’s student-run literary magazine. 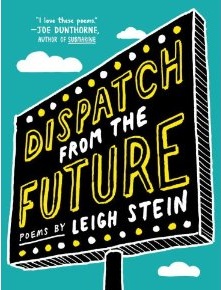 Among the first Riggio class of writers and poets, Leigh Stein has successfully and swiftly put her knowledge and understanding of writing to work. Her novel, The Fallback Plan, and a book of poetry, Dispatch from The Future, were both published in 2012 by Melville House, an independent publishing company based in Brooklyn. Despite the fact that she had written poems during her high school years, Stein had not seen herself as a writer or a poet at the time. In fact, after completing high school, she attended acting school in New York City. And it was during her time there that she turned to writing as she sought a break from the long, strenuous days. Back in her dorm room at the end of the day, Stein would write short stories that were, for her, a way to relax. This was unlike Stein’s earlier venture into writing; she was now writing fiction, not poetry.

It was this experimental writing that prompted Stein to undertake a task daunting for most writers: her first novel. This switch, however, from acting to writing, did not happen overnight, nor could Stein reconcile with this change. She could not yet call herself a writer just because she spent time writing short stories on her computer: To be a real writer she felt, she had to write a book. And The Fallback Plan was the book  that  authenticated Stein’s identity as a writer.

Written in first person, The Fallback Plan, in its style and subject matter, reflects Stein’s commitment to her target audience, new college graduates. She drew aspects of the narrative from her own experiences as both a nanny and college graduate still searching for her post-collegiate identity.  The novel concerns a recent college graduate who, instead of entering the workforce, finds herself babysitting a neighbor’s young daughter. The evolving relationships among the babysitter, the little girl, and the girl’s parents, who are mourning the loss of another child, showcase the personal connections made among individuals brought together by chance.

Currently working on a memoir about her experience after losing a close friend in a motor vehicle accident, Stein finds herself somewhat detached from poetry writing. Despite the fact that she has written prose and poetry, the two genres constitute separates realms for the author, at least in terms of ideas and content. But, she says, she will surely and soon enough be able to locate a new theme, a new message to craft some more poetry.

This command over words and across genres forms the basis of Riggio’s curriculum; it is alumni like Leigh Stein who exemplify the achievement of that goal.