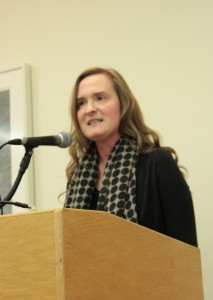 The two authors slated to read sat in the empty front row of what was otherwise a packed lecture room at The New School University. Tiphanie Yanique, the evening’s curator, introduced Victoria Brown and Amber Dermont. The theme of the event: “Write What You Know.” The reading, followed by a Q&A session, was intended to provide insight into the process of writing fiction drawn from personal experience; and, as Yanique explained, no two writers other than Brown and Dermont were better equipped to speak that evening.

Victoria Brown described her novel, Minding Ben, which is based heavily on her own experiences as a young immigrant woman from Trinidad in search of work in New York City as “part fiction, part non-fiction, part biography.” The Starboard Sea, a coming-of-age story about teenager Jason and his experience at a New England preparatory school, is a novel built on Amber Dermont’s adapted outlook, influenced and shaped by the male-majority student body at the prep school she attended. 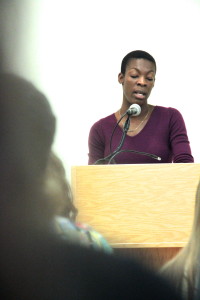 Both readings, with their own mix of humor and sorrow, carried within them a true portrait of not only the story of the characters but the writers themselves. Brown’s sultry and melodic reading from Minding Ben spoke pointedly to the struggles of a young woman trying to make a place and home for herself in a city that requires much devotion and patience. Dermont’s energetic and humorous reading was peppered with a wrenching undercurrent of adolescent pressure and angst. Despite stark differences in style and theme, both readings reflected the unique ability of their respective writers to utilize personal narrative to convey social challenges faced at individual levels.

During the Q&A, both Brown and Dermont explained that writing these personal stories served as a coping mechanism for dealing with their pasts. “It is getting rid of a story,” Brown said, “telling it and getting it out of your system.” Dermont put it rather pointedly, calling her experience of writing an “exorcism.”

“But the protagonist of your book is male,” an audience member responded.

“True, but the school I went to was predominantly male,” Dermont said. As a result, she explained, her teenage years were spent with a male perspective toward interactions with fellow schoolmates. “And that’s the beauty of fiction,” Dermont stated. “I get to write from whatever perspective is the most correct, despite the reality.”