“Mourning Poem for the Queen of Sunday” by Robert Hayden is a narrative poem about a gospel singer that takes her own life. Hayden does not use straightforward language to communicate the narrative, yet the reader understands what has happened and can personally feel grief. We mourn the loss of the singer. It is as if she were someone that the reader was close to. The emotive quality of this poem showcases Hayden’s gift as a writer.

The poem was first published in the 1949 poetry issue of 12th Street. Robert Hayden was not well known at the time of this publication even though his first collection of poems, Heart Shape in the Dust, was published in 1940. Years later, Hayden became a renowned poet and was elected to the American Academy of Poets in 1975. The next year he was the Consultant in Poetry to the Library of Congress, the first African-American to hold that position. In 1985 he became the Poet Laureate in Poetry to the Library of Congress.

Hayden grew up in a Detroit ghetto nicknamed “Paradise Valley.” He was teased and ostracized by his peers because he was extremely near-sighted and wore thick glasses. As a result, he became absorbed in reading and writing. He attended Detroit City College with a scholarship and went on to study writing under W.H. Auden at the University of Michigan, obtaining a masters degree.

Hayden was a professor at the University of Michigan for many years. He went on to publish other volumes of poetry. The most recognized—A Ballad of Remembrance (1962)—includes a revised version of “Mourning Poem for the Queen of Sunday.” The original version, published in 12th Street in 1949, is republished here. 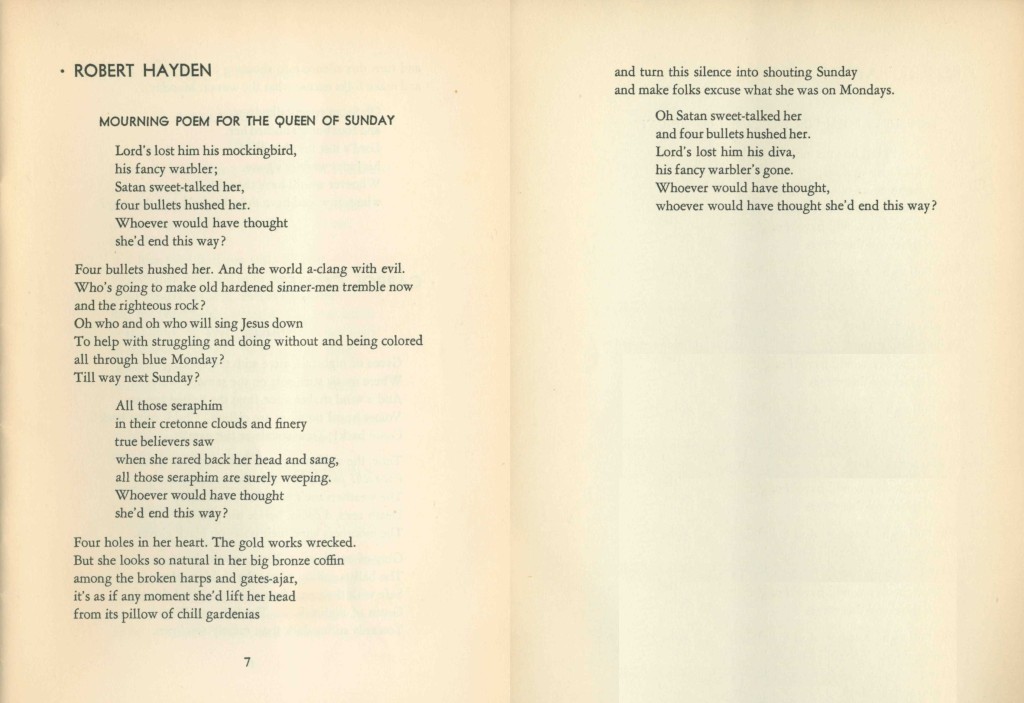 Natassja Schiel is a singer/songwriter and storyteller.