The following four poems appear in Barnett’s most recent collection, The Game of Boxes (Graywolf Press, 2012). 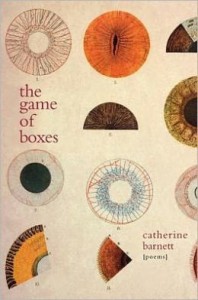 I’m studying the unspoken.
“What?” my son asks.
“What are you looking at?”
But there is no explaining,
I can only speak the way light
falls, the way the cotton sheet
lays itself over his sleeping or resting
or dissolving body, touching him with
its ephemera, its oblivion.

We didn’t believe an elephant could squeeze into church
so we went to church and waited while the priest
kept saying listen and forgive and the animals all around us
listened, or didn’t listen, some strained against leashes,
some wore disguises that made them look like people we knew,
people we should forgive or be forgiven by,
we didn’t know which, even the elephant
looked like someone we knew, flooding the doorway
like a curtain of light, swaying from side to side.
Her hide was cracked down to her feet and her eyes,
they shone like glass before it breaks.  She looked
like she might fly but only walked down the aisle
in a dirty gown of wrinkles, so wrinkled and slow
and vast and silvery, the whole galaxy shivering.

When Gutenberg figured out
how to make letters that could be
rearranged he changed us all.

and bought books and rescued books
reminding me I had only
finite years in the book of my son,

whom I almost left for books,
to whom I leave my books.

with a writer.  But I can’t
finish the play I said,

it’s full of snow.
The jaywalkers

Some of the best sermons
don’t have endings, he said

while the tires rotated unceasingly
beneath us.

All over town people were waiting
and doubleparked and

until the shiverers zipped their jackets
and all manner of things started up again.

Catherine Barnett is the recipient of a 2012 Academy of American Poets’ James Laughlin Award, a 2006 Guggenheim Fellowship, a 2004 Whiting Writers’ Award, the 2004 Glasgow Prize for Emerging Writers, and a Pushcart Prize. Her book, Into Perfect Spheres Such Holes Are Pierced, won the 2003 Beatrice Hawley Award and was published in spring 2004 by Alice James Books. Her poems have been published in Gulf Coast, Pleiades, the Washington Post, Barrow Street, Shenandoah, the Massachusetts Review, and the Iowa Review. Barnett also teaches at NYU, where she was recently honored with an Outstanding Service Award.