Sean Howe, former editor of Entertainment Weekly, uses his pop culture prowess to expose the chaotic, shifting underworld of superheroes. He came to The New School to read and discuss the process of writing his new book Marvel Comics: The Untold Story. This ambitious biographical narrative unveils both the folklore and brutal reality of the comic book industry.  Robert Polito, Director of the Writing Program, introduced the author who slightly resembled Spiderman’s alter ego, Peter Parker.

Howe was an avid childhood reader of Marvel Comics before he devoted three years to researching and developing his new book. He conducted over 100 original interviews that helped him compile the history of Marvel from the company’s inception by Martin Goodman in 1938. He chronicles how Stan Lee, the editor, and Jack Kirby, a WW veteran, revived the comic industry with the hits Spiderman, X-Men and the Fantastic Four. These inherently flawed superhero characters represent creative underdogs of society that are powerfully transformed in order to battle Manhattan’s behemoth oppressive forces. Like many kids of his generation, Howe related to this idea; he wanted to discover and battle with the extraordinary, if oppressive, world of New York City.

As years passed, Marvel went through many tribulations: losing and replacing numerous contributors and employees. It was a feat for Howe to capture the depth and intensity of the tale. Through the various interviews Howe conducted, he learned of the legal battles and debates both Kirby and Lee engaged in over their creative partnership. This complex and difficult company storyline played out so many times that Howe felt his biggest challenge in writing the book was to keep the narrative continuously fascinating despite a repetitive history of changing characters. Howe faced this obstacle by drawing parallels between the comic book stories and their respective authors. 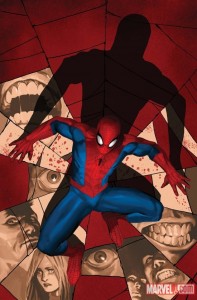 Polito likened this journey to “an exquisite corpse,” where the artwork is passed from one artist to the next. Except with Marvel, the passing of comic storylines and characters were not passed on from one Marvel employee to the next willingly. Instead the rights remained solely with Marvel and the continuation of the work was left to new employees. This left former employees disillusioned as they were forced to relinquish their creations for good.

When asked what he thought the next thirty years at Marvel would bring, Howe replied it would be more of the same: people pouring their creative energies into the corporate empire and then becoming disillusioned when they lose and abandon their work to the next round of Marvel employees. Like comic book artists, Peter Parker is an “average nerd.” He found himself subservient to his secret and larger than life reality of fighting oppression. In the end, these artists will always return to the fictional universe they have created for its radical appeal.

Howe is leaving the next Marvel exposé up to someone else. He did the best job he can to protect and represent the controversial world of Marvel comics. Marvel, a multi-billion dollar enterprise, is now more about the movies, he asserted. Howe described present-day Marvel Comics as “the cigarette machine in the lobby” of the Marvel Entertainment “restaurant.”

Natassja Schiel is a singer/songwriter and storyteller.

Jessica Sennett is a freelance cheese educator and food project builder.  She is using The New School to create a program combining food writing, the arts, and community development.