Digging into the history of 12th Street led our class to some fascinating discoveries of individuals who made up the early departments of what was then primarily The New School for Social Research. One of the most intriguing figures, Conrad Hamanaka, produced several provocative works for the 12th Street Quarterly of the 40s, continued his criticism into journalism, and later became known as the actor Conrad Yama. Greg Robinson, Professor at the Universite de Québec a Montreal, took the following foray into Conrad’s journey: The ‘Double Life’ of Journalist-Turned-Actor Conrad Yama (Hamanaka)

Below, you will find reflections on two of Hamanaka’s pieces by current Riggio students.

The marginality of the creative artist . . . gives him a peculiar vision, the vision with the question mark that cannot quite accept things as they are. This leads to a tension, a groping, that precedes the act of creativity. —Conrad Hamanaka Yama

“Marginality and Creativity” reveals the conflict laying within the dual existence of observer and observed and how this conflicting pull informs an artist’s work. It is an important read for a non-artist looking to better understand the artist and equally important for an artist seeking self-recognition and validation.

Hamanaka pinpoints the elements within an artist’s personality that lead to certain tendencies of craft: categorizing them somewhat as intellectual, emotional, or satirical. It may seem upon first impression that Hamanaka is making too broad a stroke with his brush here, but his explanation of defining aspects corresponding with each of these qualities is quite specific and frighteningly accurate.

Hamanaka would know; he spent the better part of his life in WWII America fighting his own marginality—that of an American born to Japanese immigrant parents. His career as a journalist began during his stay in various relocation camps across the nation. Hamanaka’s double displacement gave his point-of-view a very particular flair unique to those in his situation and greatly informed his hyper-politically conscious writing.

In the context of a literary journal with a mission such as 12th Street‘s—to explore a writer’s place in the world—”Marginality and Creativity” by Conrad Hamanaka (published in the Winter 1949 quarterly) couldn’t be a more relevant piece. It explores the question that triggers the process: Why write? 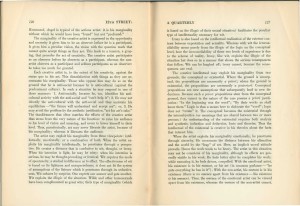 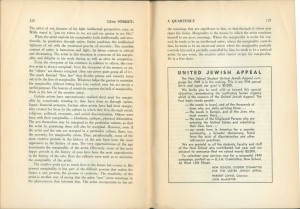 Zoe Rivka Panagopoulos is a yoga instructor who writes lots of stuff.  She is published in the most recent edition of 12th Street.

One never has to lay eyes on Bernard Rosenberg’s essay, “Spengler and the Future” to understand exactly what bone Conrad Hamanaka has to pick with it.

In his letter to the then editor of 12th Street (circa Spring, 1948), Hamanaka deflates with one page the gargantuan mass of apocalyptic fear Rosenberg so carefully constructed in six pages and one 12th Street issue prior. In short, here is the lineage of argument that brings us to Hamanaka-

The philosophical baton is passed so gracefully in this exchange, rounding bends, traversing nations and their ideologies, that Spengler’s primary source becomes microscopic in comparison, even if it is itself an extension of texts by Nietzsche and Goethe. Any way about it, Hanamaka is the finish line, autonomous and at least within eyeshot.

Though the point of “Letters” is primarily to take an article and its author to task, and Hanamaka does just that, the strength and conviction with which he writes here would have you believe that he’s screaming out to posterity, insisting that a belief in and adherence to an apocalyptic narrative (including the potentials of nuclear war) is a demise-perpetuating act.  Zombie is as Zombie does, and this is all so much bigger than Rosenberg’s essay. 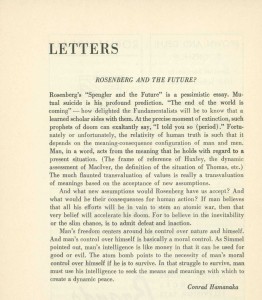 Ricky Tucker is an art critic, editor, and short-storyteller. He can quote Designing Women but not Shakespeare.