Despite all the hand-wringing about the “death of the book” and uncertainty around the future of publishing, nearly a decade and a half past Y2K, many of us are still happily purchasing and reading literature, be it hard copy or on an electronic device. But how did we get to this point? And what comes next? In “Literature in Evolution,” a course led by John Reed, students set out on a hands-on exploration of the origin of story and its uses today by creating pictograms, comic strips, illuminated manuscripts, and, finally, digital narratives of their own.

One of the highlights of the course was the series of guest lectures by professionals specializing in everything from hand bound poetry chapbooks to e-books. Emily Flake shared her experience as a cartoonist for The New Yorker, while Caitlin Wheeler, an artist and bookmaking expert, led the class in a bookbinding tutorial. Fashion designer and multimedia artist Elisa Jimenez lent her own special brand of expertise to the final critique of the illuminated manuscripts, and Benjamin Samuel, co-founder of Electric Literature and the online literary magazine Recommended Reading offered advice to students in the early phases of their digital narratives. In addition to the guest lectures, the class took a trip to the Printed Matter bookstore in Chelsea, where they sifted through their vast selection of art books, zines, and chapbooks for inspiration.

The class investigated questions that continue to plague both critics and art-makers working today. What are the advantages of print media versus digital media? What is the value of the canon for readers? Publishers? Academia? Should digital art be given away for free, or hidden behind a pay-wall? They discussed memes and paradigm shifts and videogames. They looked at ways to tell a story using a hybrid of text, images, video, and more. They took these ideas and applied them to their final projects, each of which utilizes a digital publishing platform or technology (Prezi, Tumblr, iMovie, Keynote, Jilster, and various hybrids of these platforms) to tell their own stories. The finished products were unveiled in an exhibition at the New School on December 10th, and simultaneously published online on the Eliterate Tumblr created by the class.

Haley Hardin created Postcards from My Father, a Tumblr showcasing the postcards her father sent her daily while she was studying abroad in Italy in 2003. Each postcard is unique and personal, usually featuring a snapshot or simple collage with a witty caption penned beneath it. Hardin’s use of a clean, horizontal infinite scroll make the postcards easy to navigate, and the ability to zoom in on particular cards enables the viewer to get a feel for the texture of each—the sheen of permanent marker on glossy photo paper or the rough edge of a snipped and glued image in a collage—a digital exploration of a very analog process.

Like Hardin’s digital postcard album, To Colorado, Chris Pugh‘s digital scrapbook, created in iMovie, is an interactive homage to a bygone period of his life. Pugh used his own photography, video footage, poetry, and musical recordings to commemorate his time spent living in a collective with young artists, writers, musicians, and performers in Boulder, Colorado. Though the scrapbook itself illustrates the displacement of his own generation, Pugh’s creation has a timeless quality to it, and a nod to the artist’s collectives and alternative living spaces that preceded it. A black and white video of a bearded young man singing and playing harmonica and guitar while a dreadlocked girl dances behind him with a hula hoop feels as though it could have been shot at virtually any year in the past five decades.

Ariel Bleiburg used iMovie to create Giving Birth to a Pelican, a short animated fictional film about a talk show host interviewing a mystic who may or may not have supernatural powers. Pelican was live-drawn on a whiteboard while Bleiburg and his collaborators voiced the parts of the two characters. Like Hardin’s postcard project, and Pugh’s digital scrapbook, digital techniques showcase the analog process: iMovie’s stop-motion features were applied to the speed up the footage of the illustrator live drawing.

Some students turned to the city for inspiration. Zoe Rivka Panagopolous created rBan Ear, an “Overheard in New York” for 2013. “Listen to your surroundings,” reads the tagline on the site. She asks users to take the idea of “listening” loosely, and upload images, quotes, audio clips, and other media they encounter in and around New York City. She enabled the Tumblr to have infinite storage, so users can post their findings without having to worry about their size. The simple theme is ideal for using on a smartphone, making it a perfect platform for the urban explorer. Featuring snaps of clever graffiti, strange drawings on posted MTA flyers, and other intriguing miscellany, uRban Ear emphasizes the rewards of stopping and observing.

In Bricks, a short film created on Keynote and edited on iMovie, Ari Spool anthropomorphizes the bricks of 19-23 St. Marks Place to tell the history of the building. The bricks describe the building’s transition from the site of a famous mob shooting, into a Polish community center, Electric Circus, a New Age church, and, finally, a Chipotle. Though the piece is, for the most part, lighthearted and playful (and features an endearing mispronunciation of “tortilla” by one of the amateur voice actors that narrate the piece), it also raises the troubling point that corporate franchises are erasing the cultural institutions that make New York City unique.

Several of the digital works we studied throughout the course were political, and some of the students chose to create a platform for an issue they were passionate about. Bianca de Leigh‘s Hoes Who Know Tumblr presents a compendium of artwork, articles, quotes, images, and other documents in favor of legalizing prostitution in America. The most entertaining of these are a series of pro-prostitution images that de Leigh herself created by altering vintage advertisements. 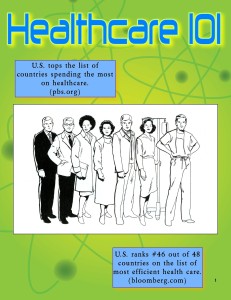 Naima Asjad‘s Healthcare 101 is an instructional digital infographic that presents facts about healthcare using clipart. The sobering statistics set against an alarming slime green background and surrounded by retro images of smiling doctors and patients create a playful sense of irony.

Adane Byron questioned modern-day standards of beauty in the digital tabloid Freak Week he created using Jilster, an online publishing platform crafted specifically for magazines. Byron contrasts Charles Eisenmann’s photographs of circus sideshow freaks with contemporary images of fashion models. The magazine is scattered throughout with cheeky ads created by Byron. In addition to the magazine, Byron created a Tumblr called Freaks R Us with similar images and captions.

Many of the platforms we researched were also handy teaching tools. Ricky Tucker used Prezi, a platform developed as a visual aid to presentations, to create Vogue: a History, a Culture, which he used to illustrate a workshop on Runway and Vogue that he taught at the New School’s department of Athletics and Recreation. The presentation gave much-needed cultural context to a form of dance that most people only attribute to Madonna.

The most fascinating part of the class was watching these stories develop. Many of them acted out the historical trajectory of the class: what started as hand-drawn storyboards or collaged zines evolved into polished digital narratives, all of which utilized their platforms in unique ways. Whether it’s being used to document a piece of personal or social history, as a pedagogical tool, or a form of political protest, the work created by these students proved that while platforms and technology may change, the human desire to tell a story persists.

Lena Valencia is a Second Year MFA Fiction student at The New School. Her nonfiction has been published in BOMB Magazine, the LA Weekly, and Tor.com.