Weaving the stories of his travels through the world with the poetry of Walt Whitman, the writings of the Beats, and his own “idiosyncratic relationship” with travel, Tom Lutz, author of Doing Nothing (Farrar, Straus, and Griroux 2006), shared his experiences in discovering himself through his travels at his February 26 talk at The New School.

Reading from a yet unpublished collection of essays, Lutz outlined his extensive travels through remote areas of Europe and Asia. Beyond just a recounting of his adventures, Lutz’s stories told the history of the traveller, the need to be a part of the world, the simultaneous need to make your world both smaller and larger.

He recalled several points in his travels where he learned to trust, to let go, to accept that he would have to relinquish control of certain situations, and in doing so, experienced moments made stronger, more indelible.

During his talk, Lutz often referenced the Walt Whitman poem, “Song of the Open Road.” In his poem, Whitman writes: 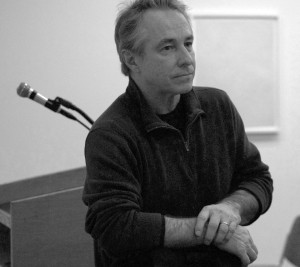 I inhale great draughts of space,
The east and the west are mine, and the north and the south are mine.

I am larger, better than I thought,
I did not know I held so much goodness.

All seems beautiful to me,
I can repeat over to men and women You have done such good to me I would do the same to you

As he opened his reading, the image on the screen behind him displayed a photo he took during one of his travels. The photo showed a brightly colored sign reading, “Roads indicate our culture.” This, along with the Whitman’s hymn to travel and Lutz’s own reflections, cemented the idea of travel as a way of belonging to something larger, of sharing your culture through your footsteps, and in turn, gathering the pieces of another culture through the steps of others.

Ashawnta Jackson is a perpetual student who occasionally tries her hand at the literary arts.

When not on the dance floor, Nico Rosario splits her time between writing about non-dance culture, making mixtapes, and Easy-Jetsetting.